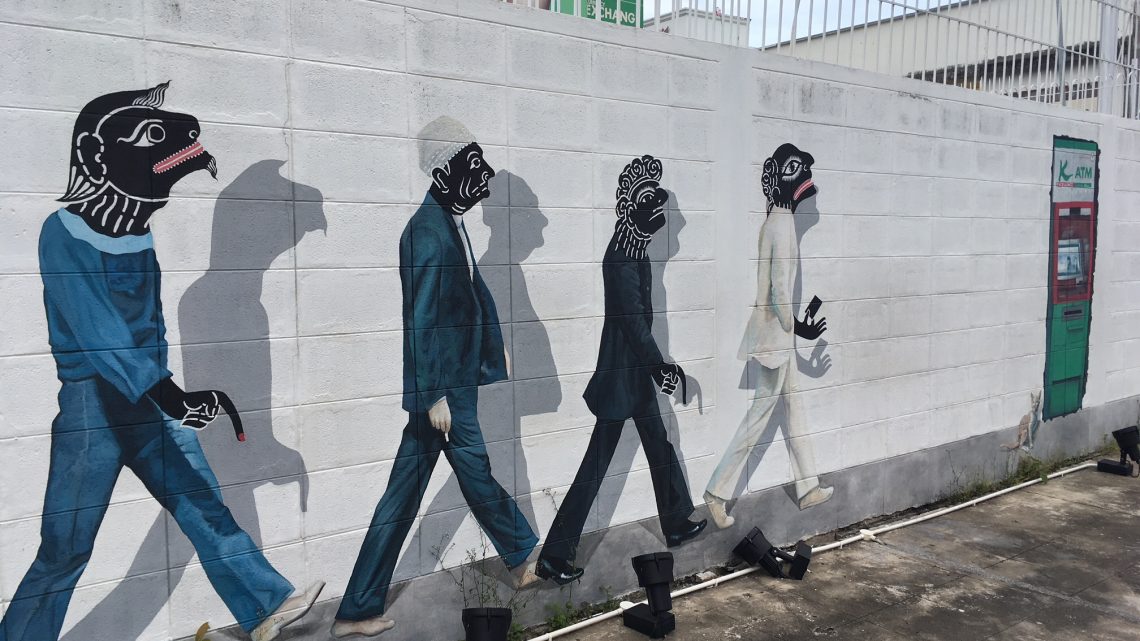 As I write this, I’m listening to BBC Radio 2 with a nice hot mug of tea in hand. That’s right – I finally made it back to Blighty!

It’s a good time to review a rather memorable year. On 1st January, I started off the year terribly hungover and not really knowing where 2018 would go. But sometime in the first week of January, the decision to finally move back from Thailand became clearer, and this helped to spur a lot of action on a variety of fronts.

I discovered Chris Guillebeau’s Annual Review process back in 2010, and I’ve been doing my own version ever since. The general idea behind it is to take time to reflect and review on the year just passed before starting to set tangible, measurable goals for the next year. Each year I download his spreadsheet (my friends and I dubbed it the Life Logframe), and half-heartedly fill it out before forgetting about it sometime around March.

This year however, I wrote my goals into Evernote, so that I could refer to them on my personal laptop, phone, and work computer whenever I wanted. They weren’t all SMART goals, but they were fleshed out enough that I knew what I needed to do. Each month, I went back to Evernote and noted key achievements and progress. After I started this blog in late-April and stated some of my goals for the year, I wrote monthly updates to help keep myself accountable.

Here’s how things have gone:

I’ll start with financial goals, because these were the most defined. Since I was only going to get paid a fixed salary until September, I aimed to:

I just came under on this one, clocking up an average savings rate of 59%, which is the most I’ve ever been able to save on my salary.

As of 1st October, my net worth was 25% higher than in December 2017, so I counted it as a win. I’m not sure how it has fared since then, especially with the market downturn, but I’ll be checking on 1st January.

I haven’t done all the sums on my travel expenses yet, but I know I’ve spent a lot less on flights than expected, and slightly more on the daily expenses.

My focus in 2018 was very much on the savings front, whereas my goals for 2019 are more likely to focus on earnings from different hustles and experiments.

The main goal career-wise this year was to quit in September, which was not all that hard! But I did want to make the most of my remaining time in my job by continuing to develop better systems, and continue to learn as much as I could.

I’d say the main achievement was getting an article published in the Bangkok Post (the main English-language paper in Thailand), which I was very chuffed about.

Now that I’m on my mini retirement, I really need to give more thought as to where I want to take my career. In my job I typically wrote about growing authoritarianism, the perils of corporate agriculture, etc. In my current copywriting side hustle, I write about pets and wedding destinations…! It’s been a fresh of breath air to not be so focused on the doom and gloom of the world. I’m enjoying it for now, but I’m sure I’ll want to dive back into the more serious side of things soon enough.

I wanted to do some volunteering outside of my main job, so I applied to be a mentor on a formal mentoring programme that matches young ambitious women from across Asia with professionals working in different fields. My application was accepted in February, and I’ve since been mentoring an impressive young lady from Sri Lanka who I speak to every couple of weeks.

I get so much out of our sessions – it’s great to see her step outside of her comfort zone, try new things, and push herself. She also helps to keep me accountable on my goals, and we share a passion for personal development, and regularly swap recommendations on books and TED talks.

I didn’t set any particular goals in regard to side hustles, except to do a lot of research. And research I did! I listened to lots of podcasts, and dove into a wealth of great blog content. I didn’t manage to develop any side hustles while working, but since leaving work, I’ve been balancing travel with my freelance copy-writing and other experiments. Money (although not very much) is starting to trickle in.

At the beginning of the year, I noted that I wanted to read 52 books, complete a bunch of online courses, learn German, and improve my copy-writing and graphic design skills.

Well I failed on the 52 books (I always set this goal and fail). I don’t know how many books I ended up reading, but it’s more likely around 20-25.

But I excelled elsewhere:

1) I set up this blog (very spontaneously)

I don’t know why I decided to blog, but hey, sometimes I do weird things. By starting a blog, I learned how to set up a simple website, follow basic SEO rules, and make some fairly bad Pinterest pins. From October, I tried to keep to a consistent posting schedule, which helped me to keep some discipline while travelling.

I’ve been slipping in December, and I’m not sure about how frequently I’ll be posting in 2019, but it’s been a fun exercise so far.

2) I did an intensive pattern-making and sewing course

For eight weeks I dragged myself out of bed on a Saturday to attend a sewing course. I learned how to draw patterns and use a sewing machine, and get an understanding just how much work goes into making just one garment. I really enjoyed working creatively, and started to see sewing as an act of resistance against fast fashion and exploitation. It’s now been a few months since I finished the course, but I hope to refresh what I learned as soon as I get my hands on a sewing machine.

3) My German has improved a lot

I’ve been chugging along on the German, trying to learn a little everyday on Duolingo, and listening to the weekly podcast News in Slow German. I realised how much I had improved when we were hanging out with a German couple in Yogyakarta, and I could actually follow the gist of the conversation.

I lost quite a bit of steam this December, but will add some German programmes to my Netflix viewing as an easy way to keep up my learning.

4) I’m earning income and learning at the same time

Finally, I’ve been improving my copy-writing skills while getting paid for it as a side hustle. My other side-hustle experiment makes a lot of use of Adobe Creative Suite, so I’m finally learning how to use Photoshop, Illustrator, and InDesign.

Before I left my job, I only managed one trip: an incredible first visit to China. But obviously from October onwards I was travelling full-time in Shanghai, Japan, Taiwan, Hong Kong, the Philippines, Yogyakarta, Singapore, and Malaysia, before heading back into Thailand.

Apart from China, none of these were new countries for me. In 2019, I’d like to see more, perhaps in Europe.

I successfully managed to do Dry January, a vegan February, and doing exercise every single day in March. Other challenges I had planned included giving up sugar for two weeks, and doing an internet detox, but I think my dependency on sugar and the internet got in the way there.

I tried and failed to keep up a fitness routine while on the road, which means that I feel very unfit currently. I’m going to be making amends now that I’m in one place for a while.

2018 really feels like a year I pushed myself to try new things and leap into the unknown. It’s also a year I really feel blessed to have so many close and wonderful friends, many of which are in Bangkok, and in other parts of Asia. At the beginning of the year I was so focused on what I was missing back home in the UK, that I almost forgot that I had also built a life in Asia with incredible, inspiring people around me.

These past three months especially have made me realise what I would miss if I decided that the Asia chapter of my life was fully closed.

I am still unsure where me and my partner will end up living in 2019, but I’m happy to say that for 6 weeks in February and March, I’ll be back in Thailand!! Going back so soon after leaving was definitely not planned, but a project came through for my partner, and I thought it would be cheaper being “funemployed” in Northern Thailand than in London.

April 2019 onwards is still a mystery, but I’ll be back in London/Europe and continuing to travel and experiment. I’ll be thinking about my goals for the new year and posting them later.

For now I hope everyone has a lovely Christmas and New Year!